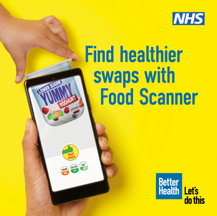 A new campaign from the Department of Health and Social Care’s Office for Health Improvement and Disparities (OHID) has launched, heroing the NHS Food Scanner App as part of its first ‘Better Health’ children’s nutrition campaign.

The App is the ideal hack for families, helping them to swap food and drink that are higher in sugar, saturated fat, and salt to healthier alternatives. The App comes on the back of a record rise in obesity amongst children over the last school year, with latest data highlighting that 1 in 4 children of reception school age are overweight or obese; this rises to 4 in 10 in Year 6 (ages 10-11). With a simple scan of the barcodes, families can see how much sugar, saturated fat, and salt is in everyday food and drinks.

The App suggests healthier swaps, by encouraging users to choose “Good Choice” products – there are thousands of Good Choice food and drink products you can swap to. The NHS Food Scanner App provides parents with an easy hack to  improve their children’s health in 2022.

Obesity and the NHS

• It is estimated that overweight and obesity related conditions across the UK are costing the NHS £6.1 billion each year
• Latest figures show there were nearly 900,000 obesity related hospital admissions in 2018 to 2019
• If all people who are overweight or living with obesity in the population lost just 2.5kg (one-third of a stone), it could save the NHS £105 million over the next 5 years

Simple steps and healthy food swaps can help children and families to be healthy now and in the future.  Download the NHS Food Scanner App today.

Thank you for subscribing to our newsletter. We'll be in touch shortly.